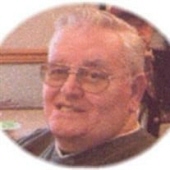 Allen "Chris" Jay Christopherson was born May 23, 1938, to Lester and Grace (Enger) Christopherson in Hendrum, MN, where he grew up and received his education. After graduation, Allen entered the US Navy and served for four years.

On December 22, 1956, he married Harriet Slininger in Ada, MN. They made their home in Hendrum and Allen worked for twenty years as a shop manager for Hendrum Manufacturing. In the 1980's, they moved to South Twin Lake in Lynwood where they built their own home. Allen owned and operated Chris Crafts where he worked as an independent contractor. He retired in 2001 due to illness and in 2002, they moved to Dilworth.

Allen loved to hunt, especially deer, and to work with his hands. He attended adult day care at the Villa Maria, Fargo, and enjoyed his time there. Allen was an active volunteer and was involved in many organizations. Some of these include the VFW, Legion, Eagles, Elks, Snowmobile Club, the County Variance Board and Watershed Committee.

To order memorial trees or send flowers to the family in memory of Allen Christopherson, please visit our flower store.