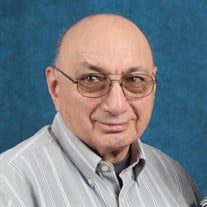 You can watch Al's service by following the link below at: https://portal.midweststreams.com/services/displayvideo/13783 Allan E. Diede, 76, of West Fargo, ND, died Thursday, Oct. 22, 2020, in the Fargo (ND) VA Medical Center. Allan Edward Diede, the son of Edward and Anna (Kraemer) Diede, was born in Eureka, SD, on February 22, 1944. He grew up in Greenway, SD, where he attended rural school. The family later moved to Venturia, ND, and Al graduated from Ashley High School. Following high school, he attended Molar Barber College in Fargo and worked as a barber for several years. In March 1966, Al was inducted into the US Army, served in Vietnam, and was honorably discharged in March 1968. On May 31, 1969, Al was united in marriage to Joyce Kautz, in the Evangelical United Brethren Church in Eureka, SD. They made their home in Fargo, in Rapid City, SD, and then returned to West Fargo. Al worked as a barber, operated an independent MAC Tools sales business, did small engine repair in rental stores, and owned/operated Al’s Small Engine Repair in Fargo for a number of years until retirement. After retirement, during the winter months, Al and Joyce volunteered with several organizations including Wycliffe International Linguistics Center, Dallas, TX and Bibleville Conference Grounds, Alamo, TX. Al was involved in the small engine repair at Rio Grande Bible Institute in Edinburg, TX. When not in Texas, they lived in North Dakota where they enjoyed fishing, camping, and serving at Bethel Church. Al had a strong faith and had a personal relationship with Jesus. He will be remembered for his check-in calls to friends/family and that he cheerfully greeted and talked to people with a joyful smile. Al is survived by his wife, Joyce, West Fargo; a daughter, Lisa Graham (fiance, Greg Paschal), of North Richland Hills, TX; a son, Brian of Loveland, CO; two sisters, Diana (Dennis) Gusse, Rapid City, SD, and Ardella (James) Swezey, Dunlap, IL; and Lisa’s children, Nathan, Caleb, Abigail, and Levi. He was preceded in death by his parents and by an infant sister. Memorials are preferred to Fargo-Moorhead Child Evangelism Fellowship, Gideons International and Rio Grande Bible Institute, Edinburg, TX. Visitation for Allan Diede will be Friday, Oct. 30, 2020, from 12 PM until 1 PM in Bethel Evangelical Free Church, Fargo. His funeral will follow at 1 PM, also in Bethel. Al’s burial service will be at the Fargo National Cemetery Monday, Nov. 2, 2020 at 10 AM. Funeral arrangements are by Korsmo Funeral Service, Moorhead, MN. COVID restrictions will include required masking and keeping social distancing. Al’s funeral service will be live-streamed at the link below: https://portal.midweststreams.com/services/watch/aKv47Cgbm9

The family of Allan E. Diede created this Life Tributes page to make it easy to share your memories.

You can watch Al&#39;s service by following the link below at:
https://portal.midweststreams.com/services/displayvideo/13783

Send flowers to the Diede family.