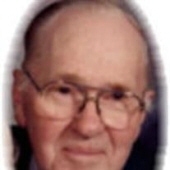 Albert Knutson, the son of Thomas and Inga Knutson, was born March 15, 1915 at Slayton, MN. He grew up and received his education in the Rothsay, MN area. As a young man, he worked for the Great Northern Railway in Rothsay and in Fergus Falls, MN.
Albert entered the US Army in March of 1941. He served in the 43rd Engineer Battalion, and was assigned to the Pacific, including Australia, New Guinea, and the Philippines.
Upon return from overseas he served from January until July 1945 with the military police in Cleveland, Ohio until his discharge from the Army.

On December 16, 1944 Al was united in marriage to Delores Gunderson, at Erhard, MN. They made their home in Moorhead, where Al worked at Horvick Electric Motor Company. From 1963 until retiring in 1979, Al was president and general manager. After retirement, Al and Delores spent much time at their West McDonald Lake home and traveling.
He was an active member of the American Legion and the Moorhead VFW where he served in their color guard for many years. He was also a member of Rotary International, the FM Homebuilders Association, the Elks Club, and his church where he served many years as an usher.


Visitation: Friday from 5 PM until 8 PM at Korsmo Funeral Chapel, Moorhead,
and one hour prior to the funeral, at the church.

To order memorial trees or send flowers to the family in memory of Albert Knutson, please visit our flower store.