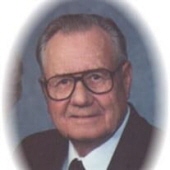 Abner Gordon Kragnes was born December 31, 1916, to E.A. and Louise (Erickson) Kragnes, in Morken Township, MN where he grew up and received his education. Abner drove school bus in the area and worked for Berglund Oil, Moorhead, MN.


On August 31, 1941, he married Berdelle M. Huebner in Glyndon, MN. They made their home in Moorhead and eventually moved to a farm in Kurtz Township, MN. They farmed for many years and Abner was a member of the Kurtz Township Board.


Abner was very active in the community, serving on the Clearview Public School Board District 88, on the Board of Directors for Northern Coop., and on the Farmers Union Board, at one point serving as president. He was Clay County Farmer of the Year, and a member of the Masonic Lodge and Elks. He was a long-time member of Trinity Lutheran Church, Moorhead, and served on their church council.


Abner loved to farm and was an example to many. He played cribbage and was an avid gardener. He enjoyed flowers, birds, hunting, fishing, and being the captain of his pontoon. He was always willing to help others and will be remembered for his love of family and for his dedication to all of his family and friends, no matter how close or how far.

To order memorial trees or send flowers to the family in memory of Abner Kragness, please visit our flower store.