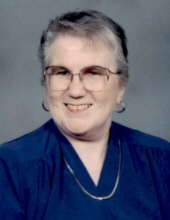 To join Jane's family for her Funeral Service, please go to her tributes wall and click on the webcast.

Adeline Jane Walker was born February 17, 1933, on a farm near Perley, MN, the youngest of fourteen children to Ditlef and Amanda (Jacobson) Volness. She was raised near Perley and graduated from Borup (MN) High School. After high school she moved to Minneapolis, MN, and began working for General Motors Acceptance Office and later transferred to the Fargo, ND, office.

On November 6, 1954, she was united in marriage to Gordon D. Walker in Perley, MN. They established their home in Moorhead, where Jane was a stay-at-home mom until she went to work at the accounting firm Northwest Audit Company. She worked there ten years before they merged with Eide, Helmeke, Boelz & Paasch and continued working after the merger for another ten years. Jane and Gordon then moved to a home on Lake Lida, near Pelican Rapids, MN, where she worked part-time at the Good Samaritan Center and had her own business “Scrubbies by Jane.” In 2013, they moved back to Moorhead and Gordon passed away on March 1, 2022.

Jane enjoyed sewing, knitting, crocheting, and cooking for family events. She loved Minnesota summers on Lake Lida. Family was very important to her.

She was preceded in death by her parents; husband, Gordon; brothers, Elmer, Donald, Arnold, Harold and Theodore; sisters, Olveig, Signora, Ruth, Volberg and Elsie an infant sister, Elsie, and a grandson, Steven Walker.

Jane’s Funeral Service will be 1:00 PM, Wednesday, June 15, 2022, in Korsmo Funeral Chapel, Moorhead, with visitation one hour prior to her service.

To order memorial trees or send flowers to the family in memory of A. Jane Walker, please visit our flower store.